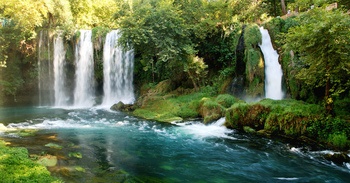 Duden Waterfall is one of the most visited tourism centers of Antalya due to its fascinating natural beauty. We have included previously unknown information about Duden Waterfall, which is frequented by thousands of local and foreign guests every year. 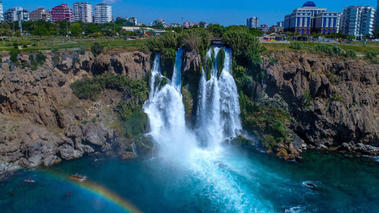 In the history, the name of the Duden waterfall is called Alexander waterfall. According to a rumor in 334 B.C, the commander Alexander the Great watered his horses here while he was going to conquer the Pamphylia region. The waterfall, which takes its source from the Hydroelectric Power Plant rises to the earth at the point called the duden head. The waterfall, known as Alexander Waterfall for many years, has come to the present day as a promenade area with the condition of being open to the public with a decision taken in 1970.

Thanks to its magnificent and natural beauty, it is undoubtedly one of the places to see and visit in Antalya. Duden waterfall flows into the sea from a height of about 40 meters over the cliffs from Lara Caglayan district. The incredibly beautiful natural scenery that spills into the sea is very popular for photographing visitors. It is a place where newlyweds often come to immortalize this natural wonder. If seeing the Duden waterfall in Antalya and experiencing this magnificent natural wonder is not in your holiday plans, we recommend you add it to your list. For more information and details about Duden waterfall, you can call us from our CONTACT numbers and get information about transportation and prices.